Through a digital interface and biosignal feedback, the IBPoet makes explicit the embodied and cognitive processes at play in everyday language interactions. A Reader reads a pre-selected poem to a Readee in front of an Audience. The Readee, who sits comfortably and listens to the poem, is instrumented with two primary biosensors: an OpenBCI Electroencephalogram (EEG) and an electromyogram (EMG) sensor. The Reader receives direct sensory feedback from these sensors in the form of a vibration band and heat gloves. Projected behind the Reader and Readee is the text being read, with keywords replaced by empty boxes. New words will appear that are selected according to the Readee’s emotional state –thanks to an algorithm that interprets her/his biosignals. With the contrast and similarities between the spoken and projected poems, the Audience senses the emotional connection between the Reader and Readee as it shifts through states of resonance and dissonance, calm and stress.

IBPoet was created with my collaborator Gabrielle Benabdallah as part of the DXARTS course Art & the Brain. The project was refined following the end of the course and presented at the ACM Ubicomp 2017 Conference. 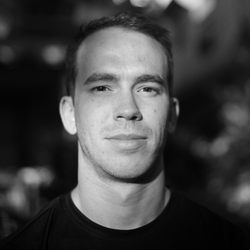